My first computer was bought in 1979 - in the days when fruit was a popular source for a computer's name (Apple, Apricot, Acorn). It was a Tangerine Microtan 65. It came as a kit, costing £59.95, and comprised a 6502 processor running at 0.75MHz on a Eurocard with 1k of RAM, a 1K PROM (holding the system monitor - TANBUG) and a hexadecimal keypad connected to the processor board via a DIL socket. The 16 lines by 32 character display was via a TV interface. The single kilobyte of RAM and ROM seem very frugal in today's environment where we talk freely of gigabytes of memory.

Programming was in machine code initially, and then assembler. At this stage the height of its achievement was a primitive form of space invaders, entered laboriously from a printed listing by my son, Michael. Over the ensuing couple of years I acquired a proper keyboard (it was in a metal case and weighed several pounds), more memory (much more), a high-resolution graphics card (I never progressed to the three that would have been required for a coloured display), a board for housing EPROMs (which I 'blew' myself), other hardware whose nature I forget and a lot of software. I acquired a copy of Forth which I used to develop a primitive but useful, and fast, word processor. Eventually it was all housed in a 21 inch case. This computer is now at the Retro Computer Museum in Leicester.

My next computer was a Commodore VIC-20. I bought it sometime around 1982 as the Microtan expanded, mainly for use by the rest of my family. The VIC-20 was the ancestor of the Amiga and good for games.

Advent of the BBC Model B

Things started to look up when the BBC model B appeared. It was fast, for its time, and used floppy discs for storage, a big improvement on tape cassettes which were used before this. Software appeared in quantity and BBC BASIC was easy to learn. 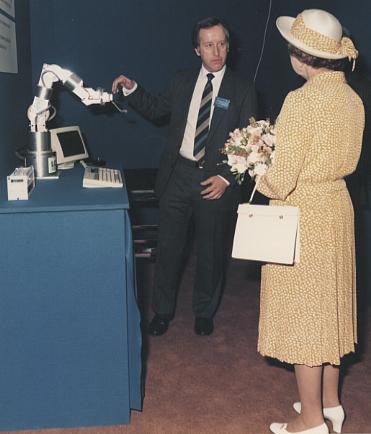 Around this time I was head of the Automation and Computing section at the Laboratory of the Government Chemist. My group worked on various aspects of laboratory automation as well as providing a computing service for the Laboratory. The automation work was aimed at designing and building in-house systems for automating a range of procedures in chemical analysis. I had some three dozen staff so, inevitably, most of my time was spent behind a desk. It was only by working with computers at home that I was able to keep up with development and maintain a position that kept me, not, unfortunately, one jump ahead of my staff but, at the worst only a couple of jumps behind. In the latter stages of my time in this post we were actively developing automated systems based on Forth-programmed robots (as can be seen in this picture). I'll leave you to work out who the lady with the handbag is.

The peak of complexity

Eventually the RiscPC was fitted with two CD drives and two hard discs (one a SCSI device). Although bought in December 1996 this system ran for many years - RiscPC don't wear out or become obsolete at the same rate as Windows computers. Over the years the RiscPC was upgraded with a Strong-ARM processor, then a Kinetic processor and RISC OS 4.33. Sitting next to it was a Windows PC; the two computers sharing keyboard, mouse, monitor and printers. There was also a SCSI scanner and a SCSI CD R/W which were swapped between computers by physically disconnecting and re-connecting the chain. These three computers (RiscPC and two Windows PCs - one used by my wife) and a Kyocera FS-1000+ laser printer were networked via an SMC Barricade Router (SMC7004ABR). This network allowed all three computers to access a colour laser printer (HP LaserJet 2605dn). The Barricade Router was in turn connected to a PTI Router (PAE-CE84) whose main function was to provide a digital modem for broadband access. I also had a Toshiba Portege A100 laptop which was connected to the network via a wireless link.

Times have changed as far as computers are concerned, and so have I. I no longer have the time or the inclination to get involved with the ins-and-outs of computer hardware and prefer to concentrate my efforts on genealogy. I replaced the complex system described above by a Dell desktop. Boring, I know, but it did the job. A couple of years ago the Dell was replaced by a Hewlett-Packard Envy-15 desktop coupled to two H-P Pavilion 24xw monitors. So with two screens and the ability, via Windows 10, to have as many virtual screens as I like, I can now have as many windows open as I wish, each on their own screen. The main limitation is my ability to remember where they are.

The HP LaserJet colour printer is still in occasional use. I prefer, however, to use electronic storage these days. It is much easier to handle and store bits and bytes than paper and much easier to retrieve. I use an elderly Fujitsu ScanSnap S510 to scan and convert paper documents directly to fully OCR'd pdf files.

I use PediTree on my Windows PC for my genealogical files of linked people, Custodian 4 for maintaining my Pluck & Pluckrose One-name Study database, and TreeDraw from SpanSoft for tree drawing. I use Libre Office and an old version of Acrobat for everything else.

I use Dreamweaver MX 2004 for writing my web sites. It is 13-14 years old, now, but works as well as it ever did. My web sites may not win any prizes for bling but I like to think that they are workmanlike and functional. Dreamweaver MX 2004 is an excellent program for managing the whole process but I still prefer to use hand-coding for the final touches to individual pages.